An open source foundation is a group of people and companies that has come together to jointly develop community open source software. Examples include the Apache Software Foundation, the Eclipse Foundation, and the Gnome Foundation.

There are many reasons why software development firms join and support a foundation. One common economic motivation is to save costs in the development of the software by spreading them over the participating parties. However, this is just the beginning. Beyond sharing costs, participating firms can increase their revenue through the provision and increased sale of complementary products. Also, by establishing a successful open source platform, software firms can compete more effectively across technology stacks and thereby increase their addressable market. Not to be neglected, community open source software is a common good, creating increased general welfare and hence goodwill for the involved companies.

5. Profits per Sale in a Given Market

6. Increased Sales in a Given Market

The Linux operating system and the Apache webserver are popular examples of open source projects that are in widespread industry use. They started out as volunteer projects without any commercial backing. When the industrial significance of these projects became apparent during the 1990s, interested software developers and firms decided to put the future of the software on more solid ground by creating nonprofit organizations.

Such an organization, commonly called a foundation, serves as the steward of the projects under its responsibility. It provides financial backing and legal certainty, making the survival of the software less dependent on the individuals who initially started it. There are many variants of foundations like trade associations and consortia. Each of them has its own matching legal structure, depending on the specific goals of the founders. This article uses the term foundation to denote all of them.

The foundation represents the community of developers, which is also why the software is called community open source [1] [2].

However, there are several economic reasons why software firms join and support foundations to develop community open source: Some members expect cost savings for products built on the community open source software, others expect increased revenue and sales from complementary products, and yet others want to grow their addressable market.

The main purpose of a foundation is to act as the steward of the software being developed and to ensure its long-term survival. A foundation has various responsibilities, including the following:

Open source foundations are usually open to everyone to join; however, a membership fee may apply. Many of their processes are similar to those of traditional software associations and will not come as a surprise. What is different, however, is the provision of the main product as open source and the resulting intellectual property implications.

In software development, three main categories of intellectual property rights must be considered:

A common practice of open source foundations is to own the copyright to all source code and related texts. Thus, the contributor agreement is set up so that the contributor, be it a company like IBM or a volunteer programmer, signs over the copyright of any current or future contributions to the foundation. (In a weaker form, sometimes only a relicensing right is required.)

Using this mechanism, the foundation becomes the sole owner of the copyright. It is important that there be only a single owner: Decision making is with the foundation rather than a distributed group of diverse copyright holders. The foundation can now define and enforce the license terms under which the project is made available to the public and can defend the software in court.

An important practice of a foundation is to ensure that no source code is contributed from another open source project with an incompatible license. The specific fear is that the contribution of incompatible code would require an undesired change of license, as might happen, for example, with the contribution of GPL-licensed code to Apache-licensed code. The GPL license is the original reciprocal (“viral”) open source license that requires all derived code to have the same license as well. “Keeping the code clean” is a prime directive at many foundations.

Finally, the contributor agreement clarifies the use of software patents. Source code implements software patents. Even if the foundation owns the copyright to the source code, without further measures, users of the software may still have to pay royalties to the holders of the patents implemented by the software. This can become particularly nasty if royalty requests surface only after the software has been put to use in a user organization. For this reason, the contributor agreement typically requires contributors to provide a general (perpetual, unrestricted, royalty-free) usage grant of the patent to all users of the open source software. This protects users from unanticipated patent royalty requests.

There are many economic reasons to start, join, or support an open source foundation. The original and still most widely known reason is cost savings realized by standardizing on one platform and sharing its development expenses.

Consider the situation of Unix and Linux desktops in the late 1990s: Several competing windowing systems existed, each with incompatible desktop applications, and all of them configured and deployed differently, depending on the Unix or Linux distribution they came with. By then, Unix had lost the competition for the users’ desktop to Microsoft Windows. Graphical user interfaces for Linux were a pure cost position for the distributors.

In this situation, any good-enough desktop software would do for the involved software firms. Distributors like Red Hat and SUSE (Novell) as well as IBM and HP decided not to compete on the merits of their desktop configuration but rather to support a common desktop environment. This led to the continued development and consolidation of the GNOME and KDE desktop environments, formally supported by the GNOME foundation and the KDE e.V., respectively. These two foundations remain volunteer efforts, however, with strong corporate support.

It is not always the software firms that start or grow a software foundation. Cost savings through community open source can have multiple roots. Sometimes, customers join forces to create a foundation and require that any software development work by a contractor utilize and develop the open source software further. Currently, the US healthcare industry is undertaking steps in this direction.

5. Profits per Sale in a Given Market

Beyond cost savings in research and development and in user organizations, original software development firms can use open source foundations to their competitive (economic) advantage.

An early example of this mechanism is IBM’s support of Linux. Realizing that OS/2, IBM’s then-competitor to Microsoft’s Windows, was losing in the marketplace, IBM threw its weight behind Linux and related open source projects. Having an alternative to Windows meant that IBM could keep Microsoft’s license fees in check when selling to customers.

In general terms, replacing a high-cost closed source component of the technology stack with a lower-priced open source component increases pricing flexibility for the vendors of the other components in the stack. It also reduces costs for customers and makes more money available for other purchases.

6. Increased Sales in a Given Market

A second consequence of the increased pricing flexibility is that a software developer can sell to more customers than before. Some customers are more price-sensitive than others. Figure 2 illustrates this as the customer demand curve. Going down the demand curve from left to right, the price for the business application plus operating system bundle goes down, and more customers are willing to buy. In simplified terms (a non-transparent market), the developer stops selling only if the price has come down to its own total cost. Thus, replacing the more expensive closed source operating system with a lower-cost open source alternative reduces the lowest possible price point for the bundle. This lets a vendor sell to more customers, which leads to more profits. 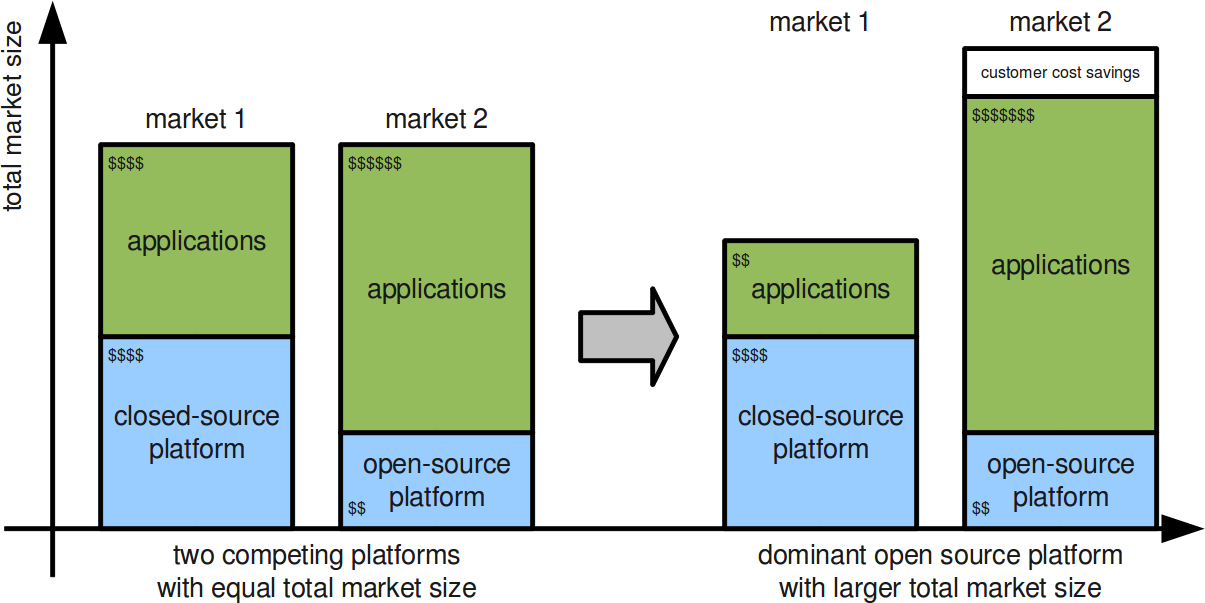 Participating in the development of the open source platform is of strategic interest to a software firm. It ensures visibility of the firm to potential customers and promises high technical quality of its software products. Gaining a strong position in the foundation and development processes of the software creates a significant positional advantage over later competitors.

There are more platforms or layers in the technology stack than some might think. The obvious platforms are operating systems and middleware solutions. Beyond this, many more potential platforms exist, addressing industry verticals as much as horizontal slices of the stack. Whether it is platforms for business accounting or medical imaging, automotive software buses or electronic patient records, we can expect a wealth of new domain-specific open source platforms to appear in the coming years.

A firm should consider creating community open source and supporting an open source foundation if it is not only competing within the same stack, but across stacks. Linux, the Apache projects, and the Eclipse platform can all be viewed as software platforms on which revenue-generating applications are built. These platforms compete with closed source alternatives, for example, the Microsoft set of platforms, namely Windows, ASP.NET, and Visual Studio.

A reliable platform attracts other software vendors that might base their own products, whether provided as open source or not, on this platform. The increasing richness of functionality around a given platform benefits everyone: Customers cannot go wrong in deciding for this platform. Moving customers from a not-supported platform to a firm’s own platform increases the size of the addressable market, which is likely to lead to more sales.

Every software development firm today should ask which open source foundation to support or, if necessary, to found. The benefits are clear: Done right, the firm can expect cost savings, increased profits per sale, a higher number of sales, and a larger addressable market. The question then becomes one of investment: How much to invest and what return to expect. At present, we lack economic models and decision processes to answer these questions.

The open source research group at the Friedrich-Alexander-University of Erlangen-Nürnberg and its collaborators are working on this question. In addition, we are looking at the processes and tools used by open source foundations and in open source software development in general.

In collaboration with the Open Source Business Foundation, an international nonprofit organization located in Nuremberg, Germany, we are making our research findings available to industry. Finally, we are interested in supporting public policy decisions with economic and technical insight to help increase general welfare through high-quality community open source.

11 Replies to “The Economic Case for Open Source Foundations”