Software development is undergoing a major change away from a fully closed software process towards a process that incorporates open source software in products and services. Just how significant is that change? To answer this question we need to look at the overall growth of open source as well as its growth rate. In this paper, we quantitatively analyze the growth of more than 5000 active and popular open source software projects. We show that the total amount of source code as well as the total number of open source projects is growing at an exponential rate. Previous research showed linear and quadratic growth in lines of source code of individual open source projects. Our work shows that open source is expanding into new domains and applications at an exponential rate.

In this paper, we analyze the combined growth of open source software in terms of lines of source code as well as number of projects. Our database contains more than 5000 active and popular open source projects. The database provides fine granular data of developer actions over the last 17 years from 1990 to 2006. We analyze the average amount of source code added per month for the time frame of January 1995 to December 2006 as well as the number of projects added over time.

2. The Growth of Open Source

Commercially, the significance and growth of open source is measured in terms of revenue generated from it. Lawton and Notarfonzo state that packaged open source applications generated revenues of $1.8 billion in 2006 [9]. The software division of the Software & Information Industry Association estimates that total packaged software revenues were $235 billion in 2006 [4]. Thus, open source revenue, while still small compared to the overall market (~0.7%) is not trivial any longer.

Several studies have been undertaken to measure the growth and evolution of individual open source software projects [5] [15] [16] [18]. Most of these studies are exemplary, focusing on a few selected projects only. The exception is Koch’s work, which uses a large sample (>4000 projects) to determine overall growth patterns in open source projects, concluding that polynomial growth patterns provide good models for these projects [8] [20]. Such work is mostly motivated by trying to understand how individual open source projects grow and evolve.

Understanding overall open source growth helps more easily answer questions about, for example, future product structures (how much code of an application is likely to be open source code?), labor economics (how much and which open source skills does a company need?), and revenue (what percentage of the software market’s revenue will come from open source?).

For our analysis, we use the database of the open source analytics firm Ohloh.net, which has been crawling open source software code repositories since 2005 [11]. Our database snapshot contains 5122 active and popular open source projects written in 30 different programming languages covering 103 open source licenses. All data is updated on at least a weekly basis.

The database contains the most popular open source projects as measured by the number of in-links to their website. The in-links are provided by the Yahoo! search engine. The database contains data from January 1990 until May 2007. Of this time horizon, we analyze the time frame from January 1995 to December 2006. We omit data before 1995 because it is too sparse to be useful.

Ohloh.net provides high-level data like project structures and developer information, but also data that goes down to the level of individual developer actions. Specifically, Ohloh provides each individual commit action of all projects over their entire history to the extent that they are publicly available.

A commit is the action with which a developer contributes a piece of code to the project’s repository. A developer’s workweek typically consists of a stream of commit actions by which he or she shares the results of their work with the team, contributing to the product or project under way.

This data collection method gracefully handles file and directory renaming. Such renaming is modeled as if the file or directory was removed and then re-added under a new name. Both code added and code removed will have equal (large) values, so the net change is zero. This avoids any undue bias in the analysis.

Libraries are typically used across many projects. For instance, the GIMP project and the GNOME project have many libraries in common. If the lines of code for both projects were added up independently we would be double-counting the libraries, leading to skewed results. We make sure that we are not double-counting code by considering each change to the original library.

However, we cannot unambiguously identify situations where a developer adds redundant source code to the code base. Copy and paste is a common practice in software development, independently of whether it is internal, external, planned or opportunistic. To deal with this issue, we adopt two approaches.

An analysis of average code contribution size in commits provides a cut-off value of 3060 SLoC that we use for the heuristic. This second approach is conservative in that we ignore not only copy and paste but also commits containing new code added. So we err on the lower side of total open source contributions.

We employ these two approaches to get an upper and a lower bound for the growth in source lines of code and number of projects. We can therefore say that properties like the exponential growth observed in both the upper and lower bound curve apply to the real curve as well. 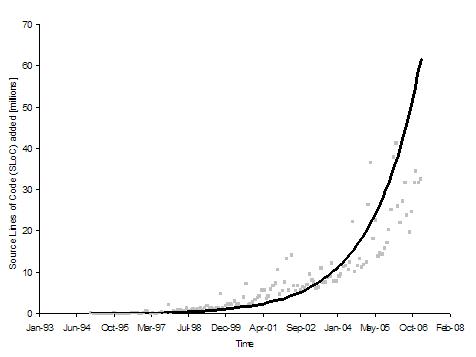 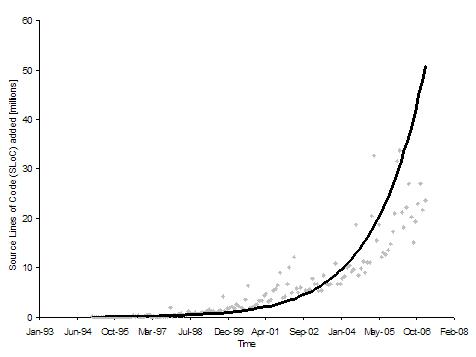 Table 1 shows models for the two plots. In both cases, the best fitting model is an exponential curve with an R-square value of about 0.9, giving us confidence in the validity of the claim that the amount of code added is growing exponentially.

Figure 3 shows the total number of lines of open source code over time. Table 2 shows the statistical models for the two approaches. The doubling time for Approach 1 is 12.5 months, and the doubling time for Approach 2 is 14.9 months. We observe that the total code in Approach 2 is lower than in Approach 1 but follows a similar trend. This behavior is expected as we eliminated all large commits in the second approach to exclude copy and paste contributions. 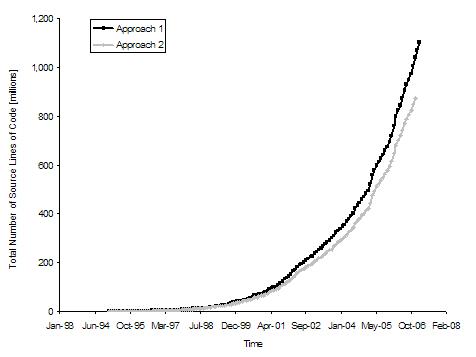 Figure 4 shows the number of projects added over time and Table 3 shows the model and its fit with the data. For each project, there is a first occurrence of a project action (for example, the initial commit action), and that point of time is considered the birth date of the project. This is the point of time when the project is counted as added to the overall set of projects. 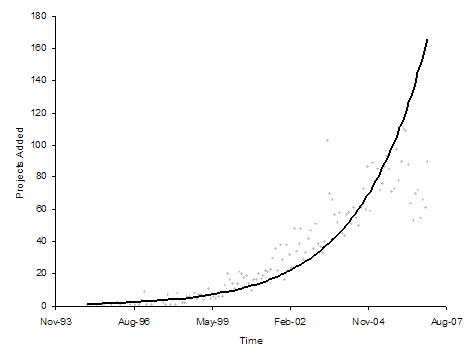 And again, we get the best fit for the resulting curve for an exponential model with an R-square value of 0.88.

Figure 5 then shows the total number of projects and Table 4 shows the corresponding model and its fit with the data. Again, we get the best fit for an exponential model with an R-square value of 0.96. The doubling time is 13.9 months. 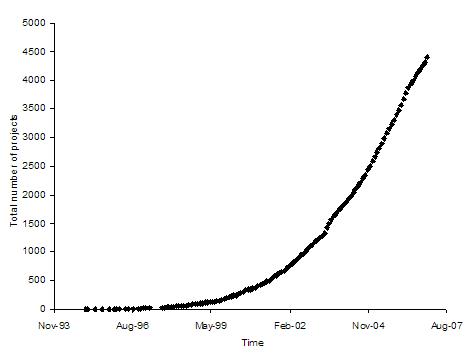 This section shows the growth of source code in open source projects as well as the growth of open source projects itself. We consistently get the best fit for the data using exponential models. The doubling time based on the exponential models is about 14 months for both the total amount of source code and the total number of projects. It should be noted that if we were to break up the data sets into separate time periods, we might find better fits for other models than the exponential model. In future work we will analyze the overall growth in distinct phases, each of which is best explained by a separate growth model.

In [13] we discuss the size and frequency of code contributions to open source projects. We can use those results to further increase our confidence in the results presented above. Specifically, the lines of code added can be assumed equal to the product of the average size of a commit in terms of source lines of code and the commit frequency. Our analysis shows that the average commit size is almost constant while the commit frequency (number of commits per week) increases exponentially between Jan 1995 to Dec 2006. This verifies our findings about the exponential growth in open source.

The quantitative analysis and the conclusions we draw have the following shortcomings and limitations.

We are continuing our work to iron out possible pitfalls based on these limitations. However, we believe that while the respective critiques can be made, the effects are rather limited, as argued above in each case.

Several studies of the evolution of open source projects have been undertaken.

Most of the research listed above explores the evolution of individual projects. The growth models of projects are typically linear or quadratic. None of the related work quantitatively analyzes the total growth of open source software.

Our analysis does not focus on any particular project but on the general trend in open source software. The projects considered are independent of any particular license, language, topic or size.

54 Replies to “The Total Growth of Open Source”